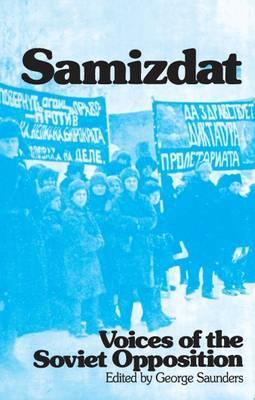 INTRODUCTION: Currents in the Soviet Opposition Movement, by George Saunders

NOTES TO THE IN TRODUCTION

Part I: From the Old Opposition to the New

The Twenties: Years of Inner-Party Struggle (and Actual Split)

In the Vorkuta Concentration Camps on the Pechora River (1936-41)

In Prisons and Camps, and at Hard Labor (Notes, Episodes and Recollections from the Forties and Fifties)

Memoirs of Aleksandr a Chumakova

Trotskyists at Vorkuta (An Eyewitness Report), by M.B.

Vorkuta (1950-53): Oppositional Currents and the Mine Strikes, by Brigitte Gerland

On the Multiparty System

Who Killed Trotsky? by E. M.

Why I Will Not Vote for Kosygin, by Pyotr Grigorenko

Persecution of Young Dissenters Is Adventurism, by Ivan Yakhimovich

We Know Many Communists Have Expressed Disapproval, by Twelve Soviet Protesters

I Will Remain a Bolshevik, by Aleksei Kosterin

The Funeral of Aleksei Kosterin

Appeal on Czechoslovakia, by Grigorenko and Yakhimovich

Appeal to the Soviet People on the Eve of Arrest, by Ivan Yakhimovich

My Friend and Comrade, Ivan Yakhimovich, by Pyotr Grigorenko

Part III: Documents of the Protest Movement (1969 and After)

Appeal to the Supreme Soviet, by Six Political Prisoners

For a Reversal of the Policy of Reprisals, by Yuri Galanskov

The New Processes Are Only Beginning, by Valentyn Moroz

Appeal for a Gradual Democratization, by Andrei Sakharov, Roy Medvedev, and Valery Turchin

Against Russification, by Seventeen Latvian Communists